Caning Seat Louis XVI Around 1760, gradually changing the furniture. Mediterranean culture resurfaced with the discovery of the Greco-Rom...

Around 1760, gradually changing the furniture. Mediterranean culture resurfaced with the discovery of the Greco-Roman Pompeii and Herculaneum that. Carpenters and cabinetmakers inspired colonnades, the moldings and antique ornaments. Nature is also a source of inspiration that artists assume the form of garlands of pine cones, acorns and flowers. The rococo style, forms tormented weary nobility and bourgeoisie, who aspires to more than sobriety. The seat is marked by inventions like the balloon (the folder in the form). Others are perforated and are influenced by English.

Big names head carpenters come into play: Lelarge, Senna, Nadal, Jacob or Tilliard. The types of seats that had been so diverse as Louis XV change little. They change their name and their main forms. The chair medallion appears around 1760, his case is oval and "Queen". Flat files (in square inset in balloon basket handle or escutcheon) and cabriolet (a trapezium, a hood, hat) coexist. The lyre, the balloon and the sheaf are perforated.
The finishing of wood from these seats is often varnished or waxed and reveals the grain of the wood like cherry or walnut. The bottom seat is trapezoidal in plan. The front is shallow arc. The base seats are tapering fluted simple or sophisticated. Grounds beads, ribbons, flutes, attributes and pastoral maidens decorate the seats. Fashion dress has changed, the dresses are now flexible. The console arm back again in the wake of the foot and curves giving greater ease. The trend is on the record "to the Queen" medallion and Greco-Roman influence is so strong that certain types of records inserted between two columns identified as the medallion or the hood. The upper ends of the record amount depending on the model by a pine cone or steeple.

The woods are painted in light colors. They are enhanced by a coated Venice of the dominant color of the fabric on the molding. Towards the end of this style, some seats will be made with wooden fruit as plum, apricot or cherry. The lining grows slowly and takes more specific forms through a nozzle end and more optimal use of horsehair. As for coverage, the stripe is in fashion and requires very precise finishes, braids or beads but also nails olives. The fabrics are just as lavish and varied, ornamented with flowers, garlands, baskets of ribbons or stripes (the gourgouran, including a silk stripe is always cream). The colors are soft 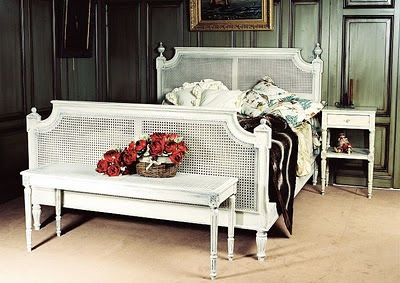