1732 - 1742 and 1807-1809 Musée des Arts Décoratifs / Palais Rohan, Strasbourg.
Parallel to the royal apartments, overlooking the courtyard, the apartment is spread Prince-Bishop also composed of three parts, but of greater dimensions modest. The third part of the suite of Cardinals, the firm is more intimate and more comfortable than the two pieces that precede it, which has endeared bedroom of Napoleon Style during the Empire. In Indeed, the city had acquired the palace in 1791 to make his home common to see quickly exceeded by the costs of building maintenance, so much so she decided to give it to Napoleon. The proposal is accepted by order of January 21, 1806. The apartments on the ground floor of the Imperial Palace are reserved for the emperor, those of the first floor Empress Josephine and her suite. Jacob realizes Desmalter furniture for the bedroom in 1807, of which only the bed remains. Seats, delivered by the same cabinetmaker in 1809, come from the salon company Empress. The Emperor will never use the room. King Charles X will occupy in 1829 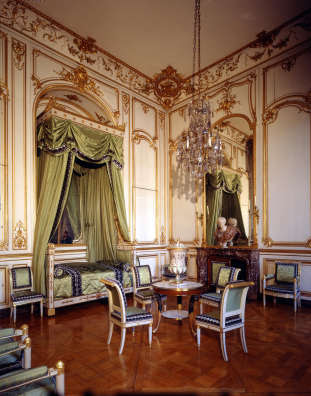