Regency Armchair So at the end of his reign, Louis XIV encouraged new currents ideas, the nobility and the bourgeois are building in Pari...

So at the end of his reign, Louis XIV encouraged new currents ideas, the nobility and the bourgeois are building in Paris hotel individuals. The protocol and softens the lines become more harmonious. Parts, better distributed, and are becoming more intimate luxuriously. The Regency illustrates a transition period begins to appear around 1695 and ended around 1725. The colors of the decoration are clear and gays, the grounds evoke nature. Changes company an opportunity to create a new variety of seat models.

Apart from the stool, bending the chair and the chair, chaise or appear the Duchess, the bench. The seats are filled, the straw-bottomed chairs. At the end of the century, the cane reappeared in France and knows its heyday under Louis XV. The chair becomes light and back to wood is often apparent. The chair has arms that start and console furniture is recessed to allow women to sit more easily with the hoop skirts and cart. The French sofas, sits on several places, is declining under different names depending on its shape.

The first Berger, leaving very little exposed wood, easy chairs are spacious, with cheeks on each side of their case and whose bottom is provided with a cushion.

Regence sets are the main shell, the flower, acanthus leaf, the rose window on the bottom graph. The feet of the seats have a spacer which lightens to disappear permanently. The slight curve of the foot is growing with the approach of the reign of Louis XV chairs. The legs end with a crowbar or a slight scroll. The records of chairs or armchairs are often flat (called "the Queen") are exposed wood with moldings and color identical to that of the bottom. At the end of this style, the matter curves. The general form of the record is less normal it is to become sinuous violin-symmetric. Renewal is in the arms that are shorter and are indented. On the arm location is reserved for the news.


The wood used for seating are beech, oak, cherry and walnut by region. Depending on the species, the wood is painted or left natural. The pads are more comfortable, the padding is better made and more rounded. The headlines are shorter and rounded. The fabrics are common silks, damask and the lamp with a plain background with multicolored patterns. The brocade, silk brocade or embroidered brocade as are still in use as well as Genoa velvet and tapestry. Braids and Studs provide the finishing of the seat. 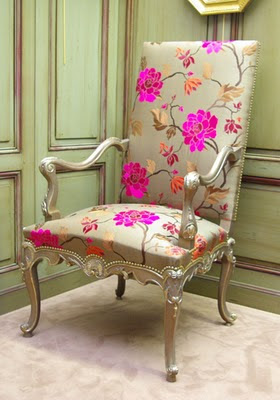